A couple of weeks ago I got to go on tour with the brilliant and hilarious Kiersten White, Amie Kaufman and Jay Kristoff. I followed them around for one week, pretending that I, too, was a Real Author. It was fun and inspiring and energizing. After panels, I signed my name in copies of my book and thought, Well, sure, that makes sense, I wrote it, but it felt so surreal.

It was fun to try out the life of a “professional author on tour” – like putting on a costume – but it was also exhilarating in the way that travel of any kind is exhilarating, for that feeling of being out of context. Who am I without my life folded around me, defining me? Who am I out here, in this featureless hotel room or moving through the airport, away from everyone who knows me and loves me? When was the last time I wasn’t running through a checklist of things to do and, buried underneath that to-do list, the unwritten list of ways to be? Both motherhood and writing a book, in very different ways, narrow my focus tightly. I got to step outside all of that for a week. I felt like I might be just about anyone, for a change.

Then I came home, and my kids were full of excitement about a particular tree they’d discovered near the university farm. It’s so AWESOME, you have to SEE it, they shouted, and just like that I slipped back into my life. It closed tight around me, but like a hug, let’s say. Everything is the same again – cooking eggs for breakfast, the clamor of voices and clatter of dishes, taking out the garbage, counting out quarters for laundry, the fall leaves and the fall light making everything beautiful, the chill in the air that has me bracing for winter.

The day after I got back, I took them with me to vote. We waited in line for over an hour. There were snacks and pizza, a party-ish atmosphere, applause for first-time voters. The older boy wore his I VOTED sticker proudly; the younger one threw his on the ground and said “I hate votes” because he hadn’t yet forgiven me for going away. I’d been away for a week and so my patience was boundless. I was feeling excited about the book I’m writing, excited about the future. I picked up his sticker and said, “OK, let’s go see this amazing tree.”

I was one of those idiots who thought Donald Trump was a joke. I mean, a vile, bigoted, sociopathic billionaire is not very funny, but the idea that he could ever be president, this ill-informed, unfocused, crude, racist buffoon? I figured, no way. The farther this thing went, the more alarmed I became at what he was stirring up, the ugly feelings that were there all along in America but became louder and louder, more and more emboldened by his rhetoric. But it wasn’t until around 10:30 Tuesday night when my husband said “shit” in a particular tone of voice and my stomach plunged that it became real: someone like this actually can be elected president. This horrible, arrogant, privileged man has believed all his life that he can have and do whatever the hell he wants – and it turns out he’s right. He can. And now he’s going to be the next President of the United States.

My seven-year-old cried when I told him about the election results in the morning. I rambled my way through some generic pap about being the good you want to see in the world, because obviously I didn’t want to say how frightened I was, truly and deeply frightened, for all the people in this country who are vulnerable, about what this reckless know-nothing bully might do to the already desperate situation in the Middle East, for the planet itself, and I’m not being hyperbolic. So I said, we will be OK, but more than ever we need to look out for people who might not be.

Because he is a better person than me, and because he is seven, and because he is reading Harry Potter Book 5 (Dumbledore’s Army!), my little beacon of positivity decided to start a Kindness Club. He invited all his friends, we set up a facebook group, and we’ve settled on a monthly budget for donations to organizations that have been working hard for a long time and who will keep on working to make the world better – like this one. He made a sign that said NO WALLS and took it to a rally on the green downtown, holding up his sign and chanting along with the crowd while his little brother held on to my leg and grumbled, “This is actually not fun.” I’m with the little one, but I’m trying. The older boy makes lists of things we should do, then sighs and says, “It’s hard work to run a whole club, but we have to fight for justice.” It cracks me up and makes me want to scream at the same time.

He’s a child, of course, with a child’s simplistic view of the world, and a child’s energy and optimism. I can’t stomach the analysis of “what went wrong” or people trying to argue that wearing fucking safety pins is somehow a useful thing right now. The Kindness Club feels hokey but sweet and if this moment is my child’s political awakening, I want to be as positive and proactive as I can, because I’m his mom, and what else am I going to do? I feel as helpless as I have ever felt, but here I am, raising two goodhearted little white boys, heirs to all the good fortune in the world. If I have nothing else of value to give, I’ve got this kid, America, who at seven years old has got your number, and who will, I hope, retain his energetic idealism and the belief that it is his duty to fight for those who are not as safe and as lucky as him.

I struggle with my natural inclination toward cynicism and nihilism, but I still think stories and art are powerful and necessary. I still think there is no way forward without empathy. I still think local action is the best way to bring about change. If you believe in the importance of books, and if you’re appalled at how few people voted and how messed up the voting system is in this country, supporting WNDB and the ACLU however you can might be a good idea.

I taped an old tweet from Lin-Manuel Miranda to the top of my computer, so I see it every morning, which is kind of silly but I don’t care. Here we are, in the ugly, incredible world, doing what we can and messing up a whole lot, but still, for now, here we are.

After voting last Tuesday, I felt so upbeat. My mind was racing. I’d just read two really great books on tour – Dana Johnson’s beautiful, wrenching collection of short stories, In the Not Quite Dark, and Laurie Penny’s short dystopian sci fi novel Everything Belongs to the Future. I was feeling inspired – by what I’d been reading, by conversations with writers and readers, by new places and new people. I was happy to be back with my family, ready to get back to my own writing. It was still hours before election results would start rolling in, before the sick feeling that’s been with me all week would settle in my gut. I packed a picnic lunch and took the kids to find this tree they were so excited to show me.

They were right – it is amazing, a huge weeping beech tree, perfect for climbing, the trunk scarred with carved messages and initials. ISN’T IT AWESOME? they shouted at me, running into the sheltering space beneath it, scrambling up the branches, and it is, it really is. We’ve lived here for years and I can’t believe we’re only finding it now, when it was here all along. 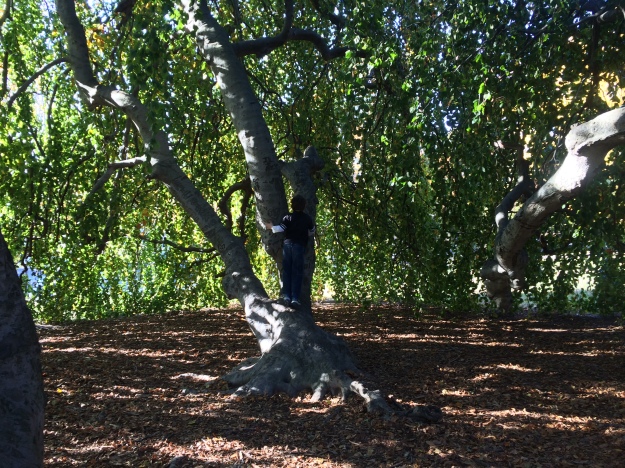