I used to be able to sleep through anything. I was known for it. When I was pregnant with my first child and people talked about how babies woke you in the night, we laughed at the idea. Nothing woke me in the night. I was actually worried about it – would I hear my child screaming?

Then I had the baby and that changed, along with everything else. Now the slightest sound will wake me. The other night, I woke to a whimper. Something splashing somewhere. I went padding through the dark apartment, found a flashlight in the drawer, and discovered water dripping down the blinds onto my older son’s head. His pillow and hair and face were soaking wet and he was still asleep. He gets the deep sleeping from me, I guess. Me before him.

I pulled the bed away from the window. I put towels down on the floor, replaced his pillow, dried his head – none of which woke him beyond a slight murmured protest. Was he dreaming that he was out in a rainstorm?

It was three in the morning but I couldn’t go back to sleep. I lay there listening to the splash of water on the towels, getting up every now and then to check on the puddle with the flashlight and to put down more towels, until the sun came up and the day began and I could call the building manager. Times like these, I’m glad to be renting.

This apartment has been crumbling around us for years. It isn’t ours, and we won’t stay forever – we’re just trying to hold it together while we’re here. I don’t feel a lot of angst about it. There’s always somewhere else to live. Not so if your city is being bombed. Not so for the planet.

Recently I read Madeleine Thien’s novel Do Not Say We Have Nothing, which takes the reader through the cultural revolution in China and right up to the Tiananmen Square massacre. It’s a devastating book, and full of the best writing about music I’ve read anywhere. Then I read Alexander Chee’s The Queen of the Night, also full of music and brutality, the French Communards slaughtered in a chapter that left me shaking. If history tells us anything, it’s that the kind of viciousness we like to call inhuman is obviously very human indeed. Maybe the moral arc of the universe doesn’t bend in any particular direction. Maybe we just blunder along through good times and bad, and sometimes into utter fucking atrocity, because we are a species easily capable of what ought to be unthinkable.

My kids and husband and I went on the March for Refugees in our city last weekend. The 7-year-old made a sign that said REFUGEES WELCOME and carefully affixed sparkly heart stickers all around it. For him this isn’t an abstract idea. Our city is a sanctuary city. Refugee, for him, means the new girl in his class. They can’t kick her out of my class, he says. After the march, playing with their legos, the boys were still chanting: “No Hate! No Fear! Refugees are welcome here!” and then the seven-year-old would shout, “Show me what democracy looks like!” and the five-year-old would shout back, “This is what democracy looks like!” They had a lively argument about one of the other chants, which went “Whose streets? Our streets! Whose city? Our city!” etc. right up to “Whose world? Our world!” Older Boy tried to explain that the chant was telling Donald Trump he couldn’t stop us from welcoming refugees, that the world belongs to all of us, and Younger Boy replied furiously, “the whole world doesn’t belong to us. It’s stupid!” I have to agree with Younger Boy, I think it’s a stupid chant. I didn’t say that, though. I said its intent wasn’t clear. Then again, I’m not big on chanting. Or marching, for that matter, but I’m trying to act better than I am. For the kids, I guess. 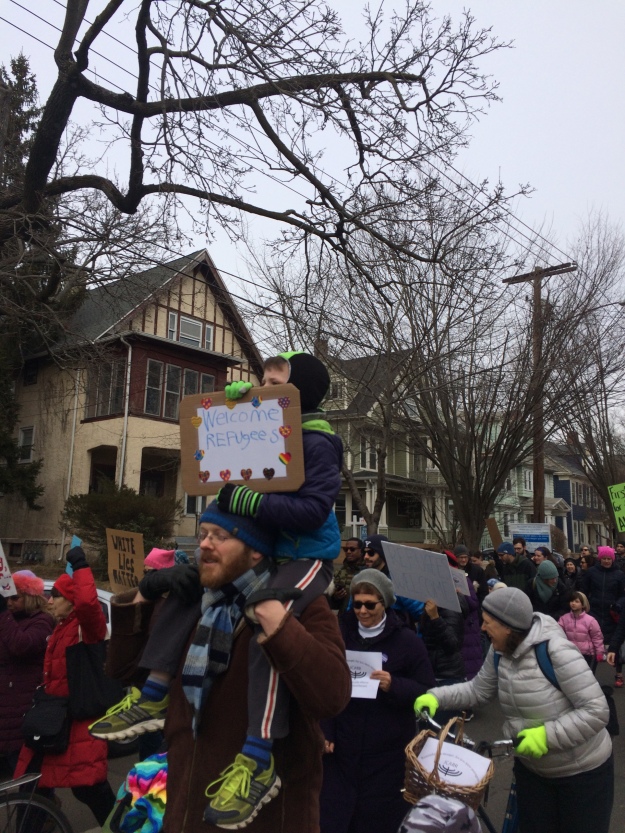 The routines of each day are measured out with beverages. Coffee for writing, tea for reading, water for checking the news and anxiously calling my state reps, bourbon for helping the kids with their homework. There is a weird emotional whiplash to what I’m reading – the devastating historical novels and the current news – and my own cozy life. I am grateful for the beautiful snowy days, for a fridge full of food and shelves full of books, for good friends and caring, dedicated teachers, long afternoons sledding, a warm apartment to come back to, all of it. We curl up on the bed to read in the evenings, the four of us together and lucky, the boys in their pajamas, husband and I trading off chapters. The kids howl with disappointment every night when it’s time to stop, lights out, and then they sleep so deeply that not even a leak right overhead splashing water in the face can wake them up.

We took donations from the kids’ Kindness Club to the local animal shelter recently. As we left my older son said, “We’re changing the world a little bit at a time,” and I nearly choked on my chocolate bar. I mean, where does he get this shit? But of course I want them to have hope. I want them to be happy and empathetic and self-aware, I want them to be the kind of boys and eventually men who have learned not to walk into every room like it belongs to them. I want them to have the optimism necessary to move things forward. I want what we all want for our kids – to leave them something worthwhile. But sometimes I think it involves lying to ourselves as well as to them. This poem has been haunting me as I think about the way we talk to our kids about the world:

Yes, I’m trying to sell them on the world, like the poem says. Every time I read this poem I’m wowed by what it pulls off – the emotional whiplash that is so familiar from my own life vs. the world. She basically tells us point blank that the realtor is full of shit, and yet I read that last line always with a ridiculous rush of hope – you could make this place beautiful. I want to believe the realtor’s lie too, I sort of do believe it when I read it, in spite of what I know, in spite of the whole poem preceding it. Because what use is nihilism to anyone? What good does it do to have no faith in the world when there’s nowhere else to go? Maybe we can’t understand each other, maybe we can’t change anything, maybe we can’t make peace, maybe we don’t really want to. Maybe half of us are truly awful and most of us don’t have the energy for anything beyond the private struggles of our little moment here. We’re all just renters, in the end.

But the kids, with everything ahead of them still, inheritors of our mistakes, we tell them it’s up to them and they believe us. We point them toward shining examples – people with the passion and energy and intelligence and empathy to spend their lives fighting for a better world. We know the foundations are rotten, but we keep fumbling forward, patch that hole, dab of paint, and we tell the kids that if they put in the work the place will hold. We hope and pray that it will hold.

I act like I have hope because I think it’s necessary to live that way, but in my deepest heart this is what I really think: when my child wakes up from a nightmare and I hold him close and tell him he is safe, I am lying. When we teach them to put their pumping little hearts on the line – to love, to care, to be brave, to fight for what is right – while the huge machinery of history is bearing down with all its grinding gears and an immense force of ill-will and apathy behind it, we are selling them on a lost cause. People as a whole are not good enough. The planet is poisoned. We live on stolen land in a nation built out of horrors. This place is done for.

I’m a lousy defeatist, I know, but I’m soothed by the idea of small acts. We can still take the joy of the moment, whatever we’ve been granted, and use it as a light. We can teach our children that no matter how hopeless things are, when you wake to the creak and drip of a crumbling home, in a building soon to be condemned, there is always something you can do to make the long night better for whoever is stuck under the leak.